Posted in Mobile Phones by Conner Flynn on July 2nd, 2009 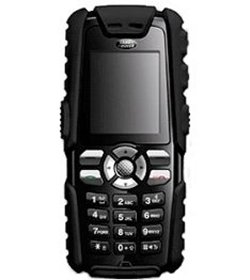 Don’t believe that the Sonim/Land Rover S1 phone is the toughest phone? Well, it can stand up to being stomped on by an elephant and it survives being run over by an actual Land Rover as well as getting thrown out of a second floor window.

Oh and it also survived being dunked in mud, cooked in a 300 degree oven, and soaked in beer. After all of that, it was a three ton forklift that finally killed it.

Sonim Technologies knows how to make rugged handsets. The company has already released some pretty tough phones in the past, but now they have a few more models scheduled for a mid-2009 release. The newest additions are the Land Rover S1 and the Land Rover S2 G4. Both will come with a protective case made from XENOY, which is “a revolutionary post-consumer plastic derived mostly from used plastic bottles and film.”

The Land Rover range will of course feature water resistance and the ability to function in the hardest of environments, including 1.6 meter drops on something as unforgiving as concrete. No word on pricing, but you can expect to pay a premium when they’re available.