Posted in Science by Darrin Olson on February 8th, 2008 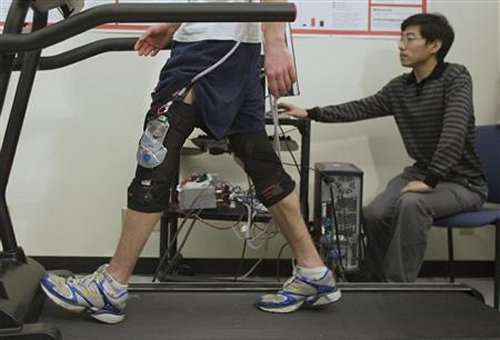 Some scientists from the U.S. and Canada have teamed up to create a new knee brace that generates electricity from your steps. The brace takes advantage of the stop energy that occurs after swinging the knee forward which would otherwise dissipate as heat, much like braking on an electric or hybrid car.

According to the initial studies on the 3.5 pound prototype, a person walking at 2.2 mph was able to create around 5 watts of electricity while wearing a brace on each leg. The researchers state that this device can generate enough electricity to power as many as 10 cell phones, or possibly a small laptop. Some practical future applications include using the knee-mounted generator for campers or soldiers who are not near electricity to power up GPS devices or satellite phones.