Posted in Concepts by Conner Flynn on November 6th, 2008 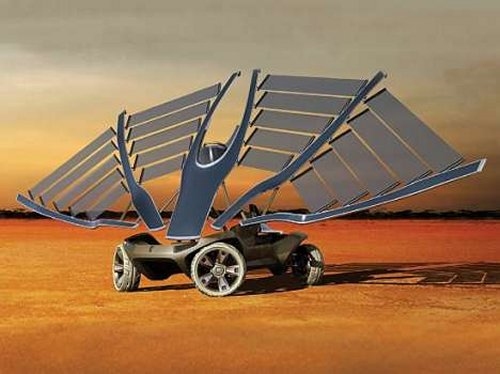 Helios was clearly inspired by the Jurassic era, when dinosaurs ruled the Earth. Helios is a concept design for an off-road electric solar-powered vehicle. When you take a break from your off-roading and stop the vehicle, the car will spread its “wings” which are made of photovolatic panels, in order to capture the sun’s rays and charge up the battery.

You’ve seen the concept in nature, where some animals have stretchable skin that absorb heat and light. A lizard might stop on a rock to take a breather and as he does, he opens up his extra skin and recharges. Same thing here. The Helios Concept won the Best Use of Technology at the Interior Motives Design Awards 2008. Pretty awesome.