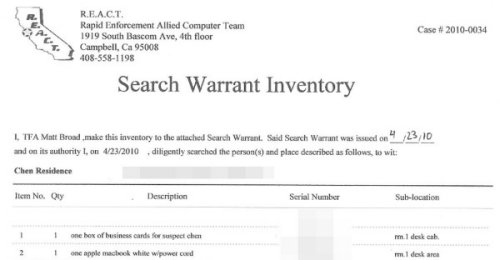 The saga of the lost fourth-gen iPhone prototype acquired by Gizmodo last week continues and it has just got even more dramatic. Gizmodo editor Jason Chen’s house was raided by California’s REACT computer crimes task force, who had a search warrant on Friday night.

His computers and other items were seized and taken away by truck. The warrant was signed by a Judge of Superior Court of San Mateo. According to Gaby Darbyshire, COO of Gawker Media LLC, the search warrant to remove the computers was invalid under section 1524(g) of the California Penal Code.