Posted in Hello Kitty by Conner Flynn on April 26th, 2009 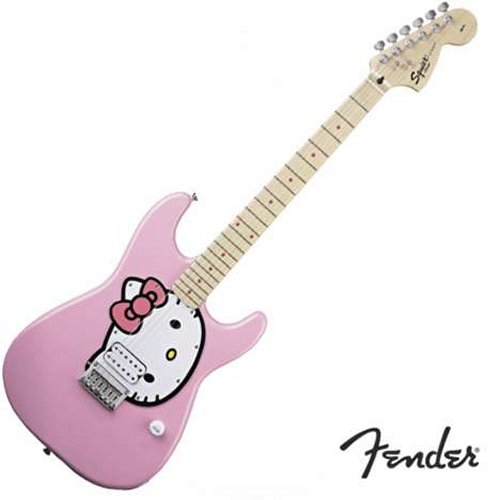 I’m speechless. The demon-spawn known as Hello Kitty has invaded rock. Her royal pinkness has her own deal with Fender. That means that world domination is nearly here. I think there may be one or two products left that have escaped her image.

Hello Kitty will be appearing on Stratocasters, music bags, picks, guitar straps, and the like which may be wielded by the likes of Prince or Hannah Montana. I bet that Metallica dude gets one and won’t admit it.

Think of the AK box as an Ottoman for serious gamers. Gamers who love Rock Band, whose instruments need some tidying up. So, if you are sick of tripping over your plastic instruments, this is a great solution. The AK Rock Box Gaming and Storage Ottoman with Drum Lift.

It’s a leather ottoman that opens up and has storage for two guitars, a foot pedal, microphone, and drums. It also features a drum lift to raise the drums from storage with one-hand. Since you take the game so seriously, you should take your fake instruments seriously too. 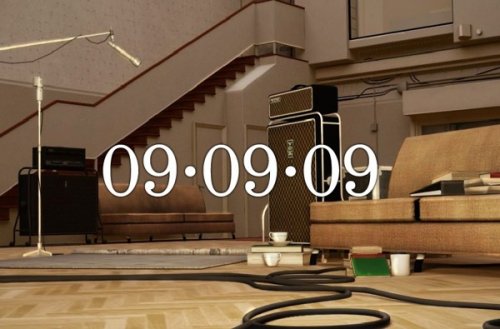 Fans of both The Beatles and Rock Band have reason to get excited. Very excited. Are you sitting down? MTV Games and Harmonix have just announced a partnership with Apple Corps, Ltd. to bring the band’s music (and instruments) to the Rock Band universe.

The game will apparently premiere with a set of new hardware “modeled after instruments used by John Lennon, Paul McCartney, George Harrison and Ringo Starr throughout their career.” If you ceck out the site, there’s a holder page up with a launch date of September 9th, but as soon as we get more info, we’ll pass it on.

Some find Pikachu to be extremely cute. Me, I’ve always been on the fence about that. What you will see in the 2 accompanying videos, knocked me off the fence and made me run for my life. This is not cute. It’s creepy in the way that clowns are creepy.

That spiky cyborg Pikachu seems to be the ringleader and was apparently recently assimilated into the Pikachu collective. As for the rest of them and the music they make together, complete with seizure inducing flashing eyes… I just wish I had never seen it. This is just totally warped. And yet you can’t look away. 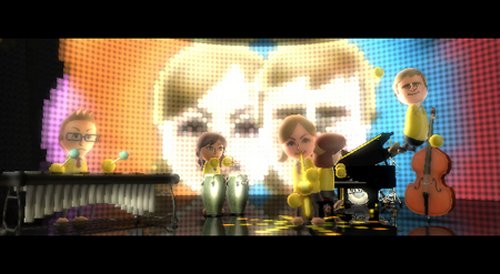 If you want to feel like you’ve just downed a 2-liter bottle of I don’t know, say LSD, have a look at the freaky video below that shows off Wii Music. Does it have what it takes to become a best seller? I don’t know, but it’s gotta require some level of skill right? Should we love it or should we hate it? All I know for sure is that the video below is like a nightmarish, trippy Mii music video that seems to want to get into your head and convert you. 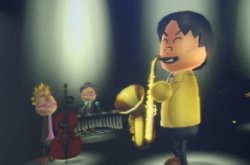 Nintendo just announced Wii Music, a new music game that will let you use the Wiimote, Nunchuk and the Wii-Fit Balance Board to create music. It’s not like Rock Band or Guitar Hero, which are based on precise timing. Instead, this one lets you mash buttons and swing the remote around like a crazy Jedi to create some original tunes. Your motions and button mashing will make beautiful music.

It’s like Beamz but with a wiimote. Hopefully less dorky. Users can play different instruments and their are a lot of options like guitar, drums, saxophone and violin. Plus you’ll be able to create music videos as well. You like? I’m not so sure it can compare to pure rocking like Guitar Hero. We’ll see. 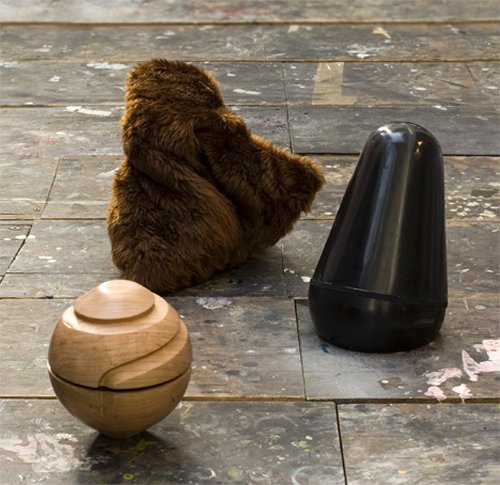 Okay, here’s marketing 101. Let’s say you have something crappy that won’t sell to the public. What do you do? Answer: Use the Star Wars angle. Let’s say you have a round ball of wood, a long black blob and a brown furry…something. Call them Darth Vader, Chewbacca and the Death Star. Now they’ll sell to geeks who have more income then they do common sense.

These designs by Benjamin Males are “The Singer, The Drummer and The Dreamer”. Huh? Who is who? The Singer has five keys and is “influenced by classical instruments such as the Violin…and is created from solid Cherry wood. It is made using 5 Axis CNCing, which enables a smooth spiral to be ‘carved’ into the cherry.” Whatever. The Drummer loops drum-beats, creating rhythm in the musical composition. Influenced by African drums such as the Djembe, the Drummer will also throw off a secondary percussive sound when you tap the flat section. Again whatever.