Posted in Projectors by Conner Flynn on May 22nd, 2008 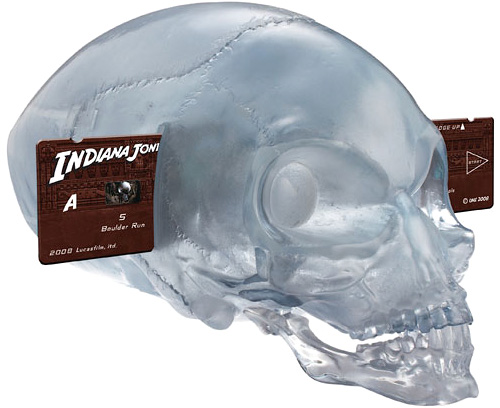 I always knew that the crystal skulls were powerful, but I had no idea that they were projectors. Actually. this far inferior replica looks like it had stitches and has had it’s skull elongated in back. Looks like lucite. Not nearly as attractive as the skulls Indy hunts for. But you have to do what you can when Indy merchandise is few and far between, compared to Star Wars merchandise.

Still, somebody in quality control should have put a stop to this cheesy thing. It comes with a set of slides featuring famous archaeological sites and scenes from the Indiana Jones films that can be projected on a wall when inserted into the Skull. You can pre-order it now for $39.99, and it’s expected to ship in October.