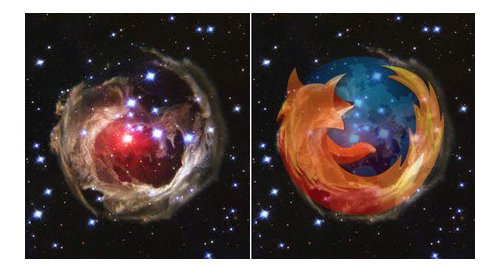 Here’s an interesting image captured by the Hubble Space Telescope. It’s an image of the variable star V838 Monocerotis which lies near the edge of our Milky Way Galaxy. Yes, it looks like the Firefox logo. The red area also resembles HAL 9000 from 2001: A Space Odyssesy.

I picture the starship Enterprise investigating and ultimately finding that this area of space is some higher beings hard drive. “I find this highly illogical Captain. Sensors are also picking up signs of Windows Vista, which indicates that the entire region is unstable and could implode at any time.”