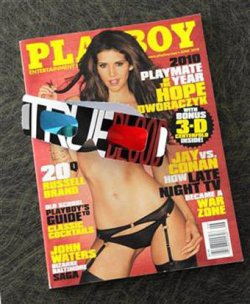 Now here’s a use of 3D that we wholeheartedly endorse. A 3D centerfold has been a long time in coming. When Hugh Hefner launched Playboy in the 50s, he hired a photographer to shoot two nude women in 3D. But the price of bundling the glasses with the magazine was too high. This week, Hef’s dream comes true.

It should also help low readership problems which the magazine has been suffering for awhile. The June edition of Playboy hits newsstands this week and will feature centerfold Hope Dworaczyk in blue and red (anaglyph) 3D.