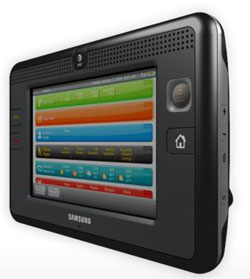 It’s getting to be more and more common for people to forgo the home phone line in favor of wireless only. The reason is that virtually everyone needs a cell phone, and only a few people need a landline. AT&T has announced a new device that makes having a landline in the home cool again.

The device is called AT&T HomeManager and in its initial launch HomeManager is available in nine markets including — Chicago, Austin, San Antonio, Dallas, San Francisco, and LA. The system revolves around a 7-inch touch screen frame built by Samsung. The frame connects to a home broadband network and can be used to place and receive phone calls.