Posted in Automotive by Conner Flynn on July 31st, 2008 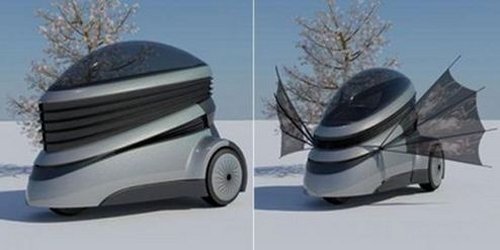 Designer Nicholas Lee Dunderdale incorporated an adjustable roof into his 3-wheeled Kassou concept car in case you need more headroom. It looks like part vacuum cleaner,part bat, and all funky alien tech. You wouldn’t be surprised if one of “The greys” stepped out of this thing and rammed a probe up your Kassou.

The “neck” can be raised or lowered depending on your need for headroom or better aerodynamics. Who knows what those batwings are for. It’s ultra bizarre, but Kassou earned second place in the Car Design News Contest for 2008. Personally, I think this is the Dark Knight’s ride from an alternate reality, where Bruce Wayne isn’t quite as rich.