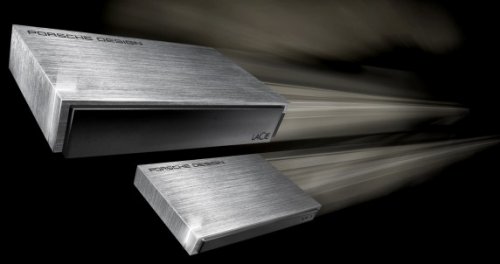 LaCie and Porsche Design have joined forces before to make beautiful external hard drives together and now they have done it again. They have just unveiled two new hard drives: the LaCie Porsche Design Mobile P’9220 and the Desktop P’9230 Hard Drives.

These hard drives both have fast USB 3.0 ports and a super sleek aluminum frame that is a real beauty. Pricing for the mobile hard drive starts at $104.99 for the 500GB model, while $119.99 is the price for the Desktop hard drive with 1TB of data, and the 2TB model is $159.99. Both will be available soon. 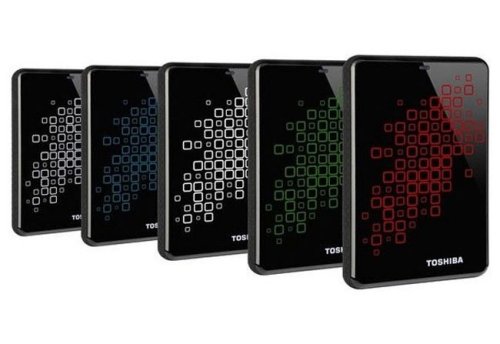 If you use several different capacity storage drives Toshiba has unveiled a new line of STOR.E ART external hard drives that are color coded depending on their storage capacities. The 2.5″ drives will come in 500GB (red), 640GB (green), 750GB (blue), 1TB (white) and 1.5TB (silver).

That should help you keep track of things. Each STOR.E ART drive has a USB 3.0 interface, 256-bit encryption, and comes preloaded with BackupNow EZ software for easy backups. These new drives should arrive in the first quarter of 2011, but we have no info on pricing yet from Toshiba. 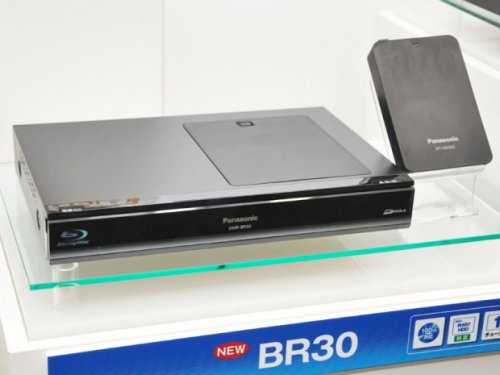 Blu-ray recorders with integrated hard drives are no big deal, but Panasonic is offering something different in their DMR-BR30 that was announced for the Japanese market. It features a slot for swappable hard drives. The idea must be to mimic VHS cassettes. It’s not a bad idea really.

The problem is that you won’t be able to swap just any hard drive. You’ll need to buy Panasonic’s DY-HDD500 500GB hard drives for $240 each. It connects via a USB connection and is only supported in this recorder. Users will be able to copy videos from Blu-ray discs or DVDs to the hard drive or vice versa. But only if you have that hard drive. 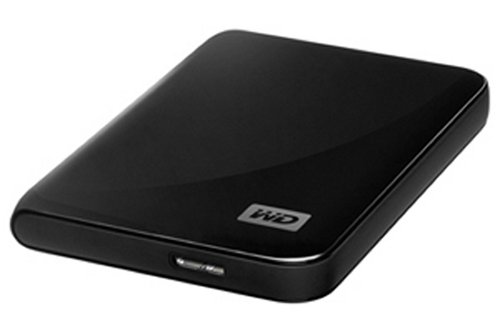 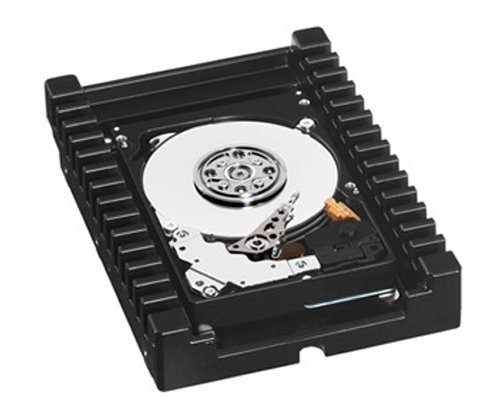 Previously it was 300GB. The drive runs at 10,000RPM via a SATA 6Gb/s connection. Sadly we don’t yet have any pricing info, but we can safely assume that the extra speed and capacity will cost you. 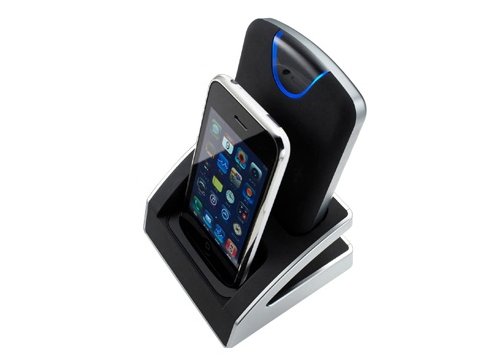 Dualie is a silly name, but fitting for this product. Buffalo has released the Buffalo Dualie. The Dualie is a 500GB portable hard drive, and a dock for your iPhone or iPod, allowing you to save some space on your desk, by docking both products together in one base.

Two in one. Dualie. Get it? Those folks at Buffalo sure are clever. It’s a much better name than doubly or SinglyX2. The device features 2 additional USB ports, and lets you sync your device with your computer and access the hard drive at the same time. 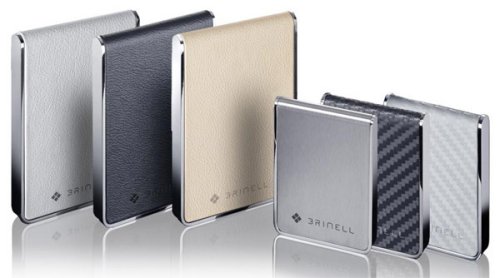 Brinell’s Purestorage line of external HDDs feature and classy exteriors. They’re almost too pretty to carry around and risk scratching that beautiful leather, carbon, wood or stainless steel case. These are probably the sexiest way to carry 160GB to 500GB on your person.

They remind us of old cigarette cases and come equipped with Mini-USB cable connections, a cleaning cloth and backup and synchronizing tool PureSync by Jumping Bytes. 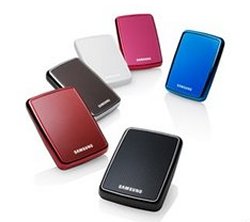 Samsung has some additions to its S Series of external hard drives. The 3.5″ S3 Station features a 2TB hard drive, while the S2 comes with a 2.5″ 640GB portable hard drive. We don’t have any word on pricing just yet, but we can tell you that the S2 will arrive this month and the S3 Station will be a bit of a wait and arrive on the market early next year.

As far as security, you are covered. Both of these new hard drives will offer similar security features to other S2 Portable and S1 Mini drives including Auto Backup, SecretZone and SafetyKey. 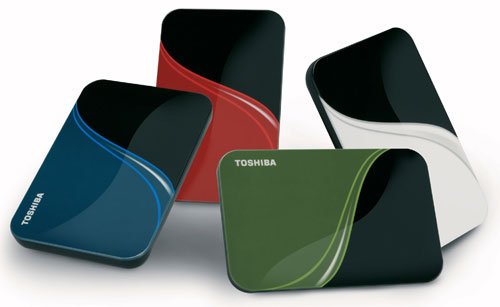 Toshiba has a new range of portable hard drives that feature new system backup functionality and password-protected encryption for greater security. The drives will ship with pre-laoded software that’s compatible with both Mac and Windows. The included NTI BackupNow EZ software lets users backup the whole system and even restore the entire system if Windows fails to boot.

These Toshiba drives will come with password-protected security with up to 256-bit encryption. A Drive Space Alert feature will alert you when it is time to perform some digital cleaning. You can choose from white, blue, green and red. 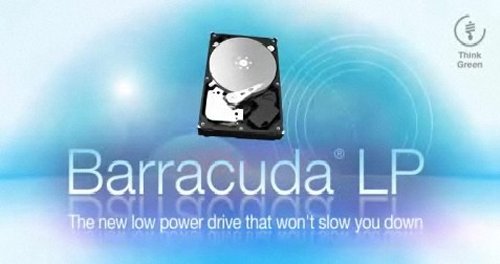 Seagate just-announced its Barracuda LP series, which cuts down the power consumption without sacrificing very much in performance. According to Seagate, the drives will use up to 50% less electricity than typical hard drives, while giving you a speed of 5,900 RPM and an average latency of 5.5ms, and a 32MB cache. 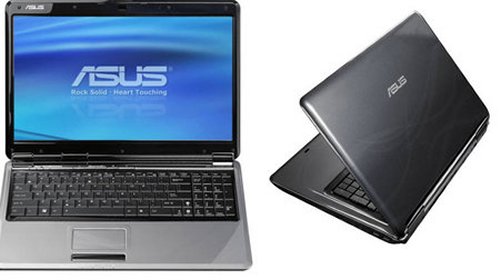 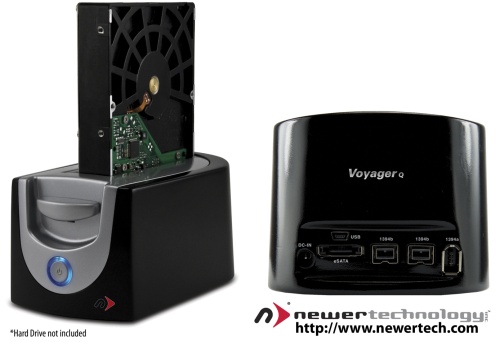 What’s one to do with all of those used up hard drives lying around? Turn them into swappable storage options, ala flash memory cards? That’s the idea anyhow with the new NewerTech Voyager Q hard drive docking station, being shown off at MacWorld and costing around $100.

Looking something like a stylish, small toaster for a hard drive, the Voyager Q is designed to turn any 2.5- or 3.5-inch SATA I/II drive up to 2TB into a bootable and hot-swappable external drive solution. It works with both Macs and PCs and lets its owner boot and swap drives at will, offering transfer speeds with a connected computer of up to 300MB/s. 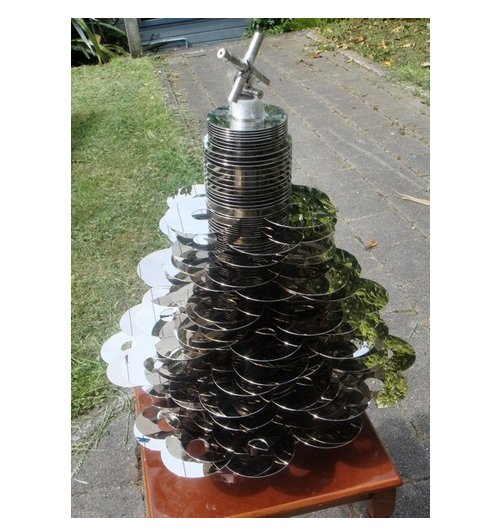 Oh yes. We like shiny. This is one shiny tree. It’s the kind of project that you take on when you find yourself with 70 defunct SCSI hard drives and a whole lotta free time on your hands. If that sounds like you this Christmas season, you can make one too, just like the builder of this tower of joy. It was built by a man with a horse name(trigger).

He took the drives from RAID arrays that were destined for the scrap heap. Instead of performing the DoD wipe that would have otherwise been needed, he built this geek tree from the shiny discs within. The tree is made entirely from the drive pieces, with one exception. A single nut. 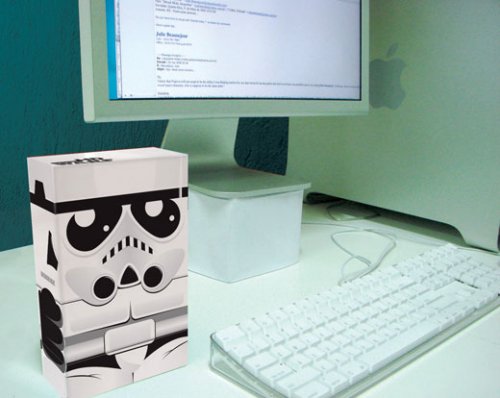 Plain boring hard drives. We’ve all got one. But what if you could jazz up that hard drive and actually make a creative statement about your work area? The artists of Brazil’s Meninos design studio hate boring hard drives and they did something about it.

It all started when they made these custom pop art hard drive cases for friends. Now they are releasing them into the wild so everyone can enjoy them. Each external USB hard drive case is made by hand at their studio, using a custom acrylic case covered with a vinyl wrapper that features one of their designs. They’ll also make custom designs for you if you want to upload Adobe Illustrator art using their custom template. I like the Stormtrooper.

END_OF_DOCUMENT_TOKEN_TO_BE_REPLACED
Permalink | Comments (1) |
Posted in DVD by Nino Marchetti on May 8th, 2008

BCD has produced a new industrial DVD recorder which can also record to a built-in hard drive. It is called the DVD-1150HDD and you’ll find it pricing at around $2,000.

The BCD DVD-1150HDD is primarily targeted towards more commercial applications. It is designed to be remotely controlled via RS-232, USB or Web-based interactions. Video recorded via this device can be done to either a DVD or standard 250GB hard drive. BCD says the drive is large enough to store around 58 DVDs worth of data.