Posted in Speakers by Conner Flynn on December 7th, 2010 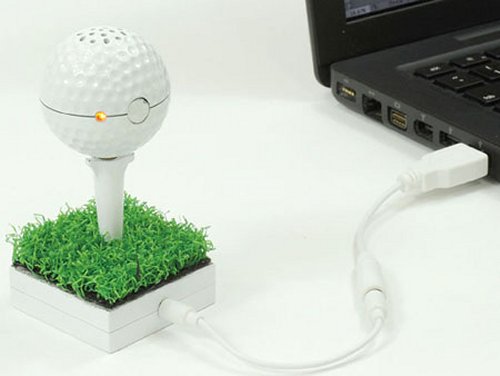 Golfers will love these Golf Ball Speakers. They are called ‘Shinekkusuinfotekku’ and will look good on any golfer’s desk. It has a diameter of 42.5 mm and weighs just 25 grams. It also comes with a stand so it won’t roll around everywhere.

That’s not all. It comes with voice messages from Japanese comedian Serizawa and the battery is rechargeable and provides up to six hours of continuous play on a full charge. It can also be charged using USB. 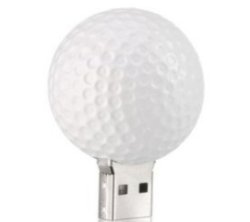 Few people play with more balls than Golfers. And Golfers love them some accessories that look just like the balls they play with. While I can’t tell you which company makes the biggest or smoothest, or most dimpled balls, I can tell you that this golf ball is a flash drive.

This 1GB Golf ball USB Drive looks just like a real golf ball. Only smaller. It’s about half the size. Golfers will love it. While professional Golfers will hate it as it just reminds them of their day job. 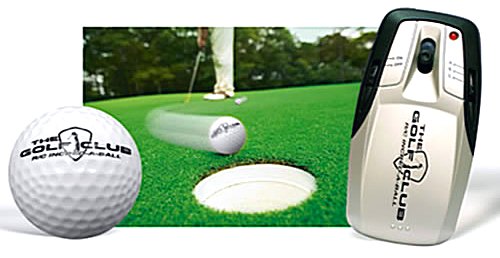 I personally don’t find a sport like Golf fun. This radio controlled Golf ball might make things a little more bearable and fun. It’s the ProActive Sports Radio Controlled Incred-A-Ball. A radio controlled golf ball that has a radio activated gyroscope inside.

Turn it on and the ball goes crazy, moving around. Watch the reactions of various stuffy old dudes as you trick them. They can try all they want to take their swing, but the ball is going to move on them. It gets recharged via a dock and only costs $19.

I don’t play golf. Mostly because I suck at it and I don’t get the point of hitting a ball with a metal stick, driving to that ball, then hitting it again, and again. But the Air Force Golf Ball Launcher would make the game fun and even if I still suck, I’ll have a powerful gun to shoot people with.

The idea is that handicapped people who can’t swing a club can still get in on the action. The designer of the launcher created the product after his father had a stroke and was left without the ability to use an arm and a leg. It allowed him to continue to hit the golf course with his father. The Air Force will launch a golf ball from a few feet to up to 300 yards. This could be the beginning of a new breed of golf.