Posted in Science by Darrin Olson on February 23rd, 2008 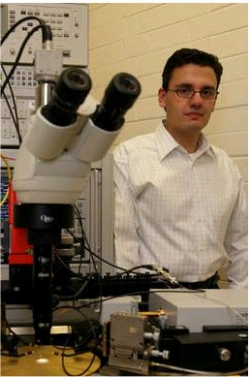 The University of Melbourne announced on Friday a new technology they are calling “GiFi”, which promises some serious game-changing wireless transfer speeds for all types of consumer gadgets. The tiny silicon chip invented by professor Stan Skafidas is able to move data through the air as fast as 5 gigabits per second at a distance of just over 30 feet.

This short-range wireless technology would potentially be a competitor or more than likely a replacement for WiFi, and things like Bluetooth might want to look out as well. The transfer speeds combined with the constantly increased storage capacities of small handheld devices could really take media down some new avenues as well. The Age newspaper uses an example of transferring a high-definition movie from a kiosk at a store to your mobile phone in seconds. Then that same movie can be transferred just as quickly from the phone to your home computer or entertainment system to watch.