Posted in Star Wars by Conner Flynn on October 23rd, 2008 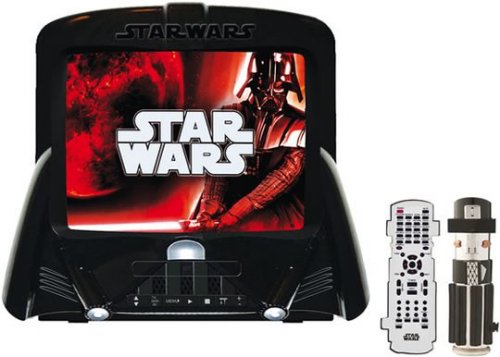 Open letter to George Lucas: Please get a new hobby. Indy is just recovering from your brutal raping of him as you prepare to do it again in Indy V. You raped a Sarlacc Pitt sized hole in the Star Wars universe with Jar-Jar alone. And the merchandise that you approve gets crappier by the day. This Star Wars TV/DVD with Lightsaber Remote is a cheap plastic piece of turd that makes me feel sad. Even the lightsaber remote doesn’t help it. Please George, take up poker or backgammon, maybe bowling. We have suffered enough. 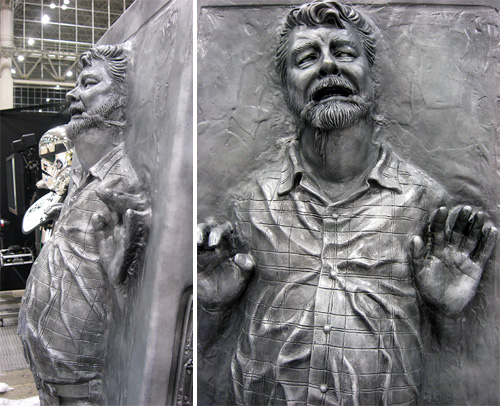 All I can say is that it’s about time. If I could have frozen him myself I would have. This is the man who gave us Ewoks. And for twenty some years that was the least of his crimes. He became public enemy number one when the Star Wars prequels arrived, giving us such intelligent and top notch creatures as Jar-Jar and the wooden acting of a young Mannequin Skywalker. He finally explained the force, which was some BS about midichlorians that are like little tiny atoms that can infiltrate the womb and create life instead of some cool mysterious force.

He basically threw the story of the original trilogy out the window and now he will pay for all eternity, frozen in carbonite. Oh yes, I want this on my wall so I can gloat like Jabba and laugh at him. And let this be a lesson to other directors who want to serve us up some crap instead of quality and well thought out stories. I imagine Spielberg can always dress up as Leia and rescue him while I sleep, but that’s what the Rancor and the Sarlacc pit are for.