Posted in Games by Conner Flynn on December 15th, 2008 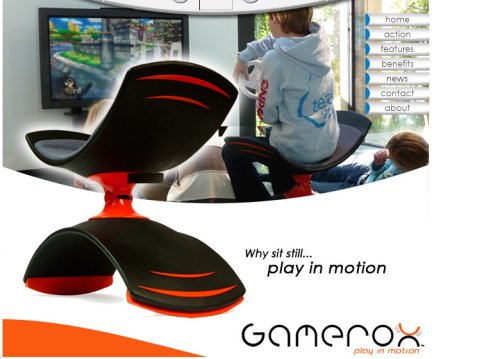 Gamerox is a new concept in game seating, designed for younger gamers by designer Tim Briggs. The basic idea is that keeps them moving while playing games, so their little muscles don’t atrophy and so they won’t need a walker by age 12 due to too many First Person Shooters. The design and patented mechanisms encourage full 3D body movement during game play. This movement improves circulation and aids muscle and skeletal development. Gamerox also assists in the development of coordination, balance and spatial awareness.

So if your kid seems kind of, uh, dumb, weak and not so self aware because of their gaming, this may set them straight. Apparently the seat design encourages an upright sitting position which is good for core stability, muscle training and posture development. Gamerox can be used with any game console.