Posted in Apparel by Conner Flynn on July 3rd, 2008

Stylish and perfect for any July 4th celebration. Walk into any BBQ wearing this baby and they know you’re all about getting plastered. After a few burgers and hot dogs of course.

It’s like you’re saying that there’s really no reason to hide your love of spirits any longer. And those around you will know that they’ll be cleaning up your vomit later. No need to risk your pants falling down when you go for a drink either since the whiskey bottle is removable. No doubt there will be other reasons your pants will fall to your ankles. It’s available for $19.50. Make the most of it, they won’t be inviting you again. 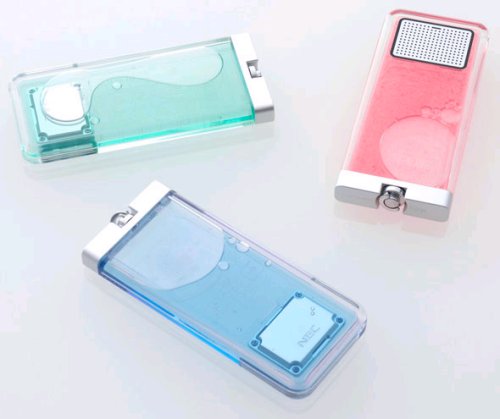 This is the most convenient way to see how much “juice” remains in a device. Juice being battery life and in this case battery life being displayed with liquid. We don’t have many details, but this flask phone from NEC looks like it is liquid-powered and touch-screened. This one is so far out there that it must be a prototype.

According to NEC, it’s going to be released sometime in 2008, if you can believe that. It doesn’t get much cooler then being able to watch the liquid inside drain as you’re using the phone, so you can see how much power you have left. (Okay, that’s a lame hobby. But the concept is awesome.) Hopefully it will be available here in the U.S. The colors are obviously very woman friendly.