Posted in Facebook by Darrin Olson on September 11th, 2009 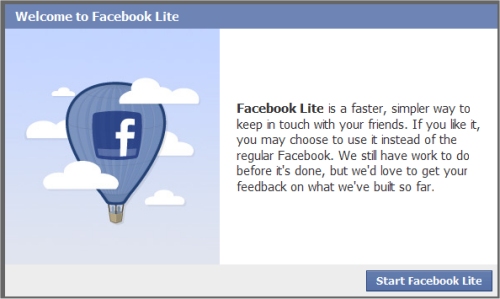 We all know Facebook is continuously evolving, and just recently the social networking behemoth made some announcements that will likely make its popularity even larger, partly by making things smaller. On Thursday Facebook launched Facebook Lite, which is basically a scaled down version of the current Facebook site. Existing users can log onto Facebook Lite and it even uses the same cookies to recognize you if you are already logged in. All you friends are there and you can post messages, but it’s just got a little fewer “pieces of flare” about it.

The idea for Facebook Lite is to make a slimmer version of Facebook, not too unlike Twitter, that more people could use in places that have limited access to bandwidth, so the pages are not so “heavy” to load. So far the site is ironically only available in the U.S. and India, but I suppose they have to test it out somewhere. Chances are it will be rolling into some more obscure areas of the world soon.