You might remember that Evolta, that little robot powered by 2 AA Panasonic Batteries was going for another robotic record. Well, the little guy did it. He broke a world record by traveling for 23.726 km at Le Mans. Still, it must have been hard to watch such a little bot make 5.6 laps in 24h.

This is Evolta’s 2nd title in the Guinness Book of Records. We congratulate him and look forward to his next big win. The heart of a champion beats in his little blue chest and the eye of the tiger looks keenly toward his next challenge.

Panasonic’s cute battery-lovin’ mascot is at it again. Last time, he was showing off his abilities by scaling a Grand Canyon cliff. Now EVOLTA is back and he’s still all about breaking records and the hearts of fan-girls everywhere. This time he will be riding a mini tricycle in order to set a world record for distance traveled by a robot.

We’re rooting for the little guy, but we aren’t so sure he is gonna make it. I mean EVOLTA isn’t exactly fast is he? The bot does have some upgrades from his previous version however. He can ride a bike and follow an infrared path set up by his human handlers.

END_OF_DOCUMENT_TOKEN_TO_BE_REPLACED
Permalink | Comments |
Posted in Robots by Conner Flynn on May 25th, 2008 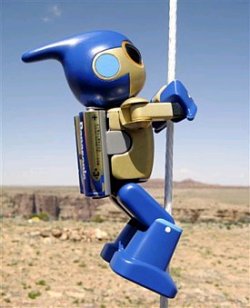 What’s the one thing we need more of in the 21st century? If you said that we need more robots performing daring feats, you’re in luck. It just so happens that on Saturday, the Panasonic Evolta battery robot, a 17-centimeter tall super-hero looking bot and all around bundle of cuteness, scaled a 500-meter cliff at the Grand Canyon.

It was a publicity stunt of course, to show-off the endurance of the Evolta AA alkaline batteries. The Guinness Book of World Records already recognizes the batteries as the longest-lasting of their kind. The robot, powered by just a pair of Evoltas, pulled itself up 530 meters of rope, finally reaching the top after 6 hours and 45 minutes. I don’t know about you, but if you show me a cool robot doing cool stuff I’m gonna buy your batteries.