Posted in Games by Conner Flynn on April 4th, 2009 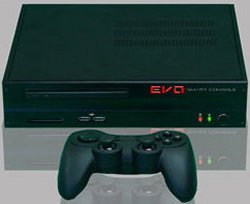 We first told you about Envizions new console back in October. It goes by the name of the EVO Smart Console will be powered by an AMD Athlon 2.4GHz processor, and will be accompanied by a Fedora-based Linux distro. The open-source console will give you game play, Internet access, VoIP communications and HD video playback all in one box.

It should work with Envizions “cloud” computing service, where users can pick up Amiga-based games and a video on demand service where you can choose from over 10,000 titles. The beta shipment for developers will begins next week with a 100 units. More systems will be released later. We have some updated specs below.