Apple’s iPad 2 and Samsung’s new Galaxy Tabs are among the thinnest tablets on the market today. Well, there’s a new thinnest tablet on the scene according to an announcement made by a Chinese manufacturer known as Shenzhen Guangxuntong Communication Technology.

They have developed what they claim is the “world’s thinnest tablet PC’, and it comes in the form of its new EKing T9 device. The EKing T9 sports a 9.7-inch IPS capacitive touchscreen display and Intel’s Z670 processor which is clocked at 1.5GHz. The EKing T9 tablet is also said to feature 2GB of memory, along with both front and rear-facing cameras. 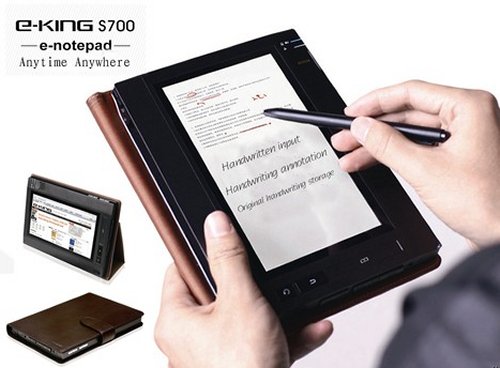 Why would you want an Apple iPad when you can have the EKING S700? It’s the “first e-notepad in the world”. The S700 is aimed at those who work outside of their regular office environment and need to take notes.

The device features resistance touch control and electromagnetic induction touch control, along with 3G connectivity. You get a 7-inch display and Wi-Fi as well. Even a 3-megapixel automatic focus camera. Yeah, I think I’ll go with the iPad just the same, thanks.