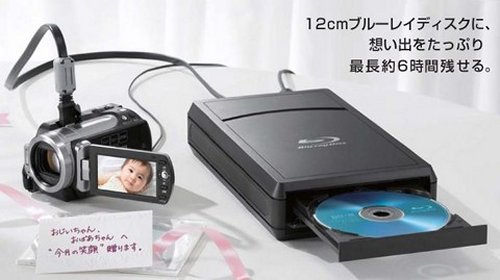 Hitachi has announced a new Blu-ray burner that can create discs from the latest camcorders with eSATA ports. The DZ-WR90 plugs straight into the camcorder and automatically creates discs from the footage that you select. So, you don’t need a computer. It even finalises the discs automatically, making it an easy complete one-step process.

The drive will also work with DVD-R discs, and even supports double-sided media as long as you’re willing to flip them yourself. They’re claiming that a Blu-ray disc will fit around three hours of full 1920 × 1080 footage and burn in 1.5hrs; or up to six hours in 1440 × 1080 resolution. A DVD can store up to one hour of 720 × 480 footage. This should make it easy for anyone who wants a simple way to share their video.