Posted in iPod Accessories by Darrin Olson on June 23rd, 2008 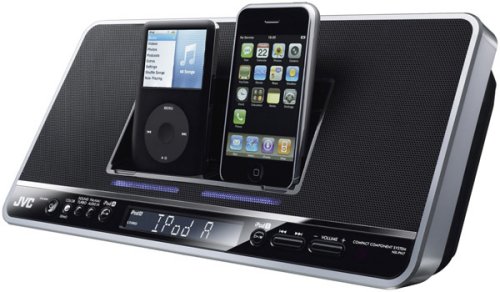 Today JVC finally officially launched that dual iPod docking station we saw earlier this year at CES which has the ability to dock two iPods at the same time. The NX-PN7 stands out from the crowd of endless iPod accessories since it can hold not one but two iPods, or an iPod and an iPhone, charging and playing from either of them.

The dual iPod dock also features an AM/FM clock radio and video out to output your video media to a television. And don’t forget that bit of “flare” they added to the device with the illuminated strips that can show one of nine colors. JVC appropriately has set the retail price of the NX-PN7 to about double the price of a single iPod dock, at $149.95.