Posted in Iogear by Shane McGlaun on March 3rd, 2008 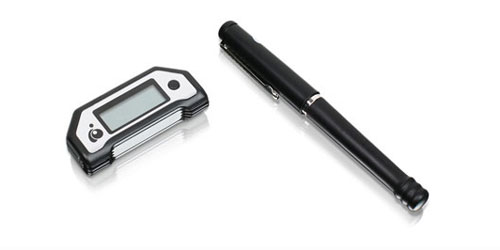 Back when I had a real job I often wanted to take notes that I could store on my computer without actually having to take my computer with me to a meeting. I also had to endure the irritated looks my lab partner gave me when I was typing away on my notebook during class in college. IOGEAR has announced just the ticket for the times when you don’t want to use your computer to take notes, but want to be able to get the notes into your computer to store.

IOGEAR announced today its new Mobile Digital Scribe that allows handwritten notes to be written on standard paper using standard ink from an included pen. In fact IOGEAR says that the GPEN200N can capture handwritten information from any surface. The handwritten notes are stored in the ultrasonic transmitter and a special infrared pen that uses normal ink is required for the system to operate. The pen is included with the system.