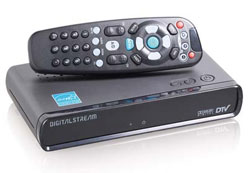 So far 2008 is slipping by much faster than I expected and before you know it the digital transition in early 2009 will be here. If you aren’t using a satellite or cable provider and are using an old TV lacking a digital tuner you will need a converter box. While all high-power stations are required to transition to digital broadcasts in 2009, low-power stations in some communities don’t have to change.

That means that in some areas TV watchers could continue to receive both digital and analog signals after the official date for the digital transition. If your community is one with low-power stations what you need is a converter box like the RadioShack DTX9550. This box is a fully digital converter and features analog pass-through so one converter allows the viewing of analog and digital broadcasts.