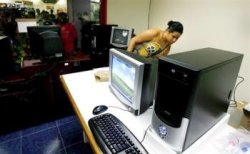 Cubans have been able to get underground and illegal PCs for a while, but the Cuban government only recently lifted the official ban on them. The first publicly-available machines just went on sale Friday. The QTECH PCs are state-approved are only available at a single store. The crowds had a chance to gawk at some not too cutting edge tech. The towers cost $780 and feature Celeron processors, 512MB of RAM, Windows XP, and come with a CRT display.

And even should they buy one, most Cubans won’t be allowed to have Internet access. Silly Cubans, the net is only for certain “trusted officials” and state journalists. The good news is that with computers now legally available, some expect black market prices on more up-to-date gear down the road.