Here’s a heartwarming story of two robot geeks that fell in love and were then married by a robot. Tomohiro Shibato and Satoko Inoue were married in a ceremony conducted by none other than the 4-foot tall i-Fairy robot.

We aren’t sure if that is actually legal in Japan. And if it isn’t, this guy has a legal way out at some point. At the very least I hope this same robot will handle the divorce. We hear that some Roomba’s walked her down the aisle and Asimo caught the bouquet, while Bender smoked a cigar in back and proclaimed, “I’d hit that”. 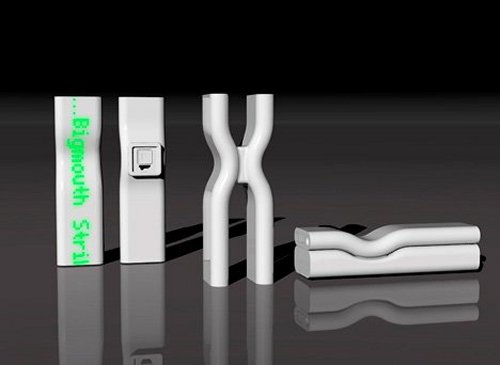 The Twinned MP3 player requires two devices to join up in order to function as one unit. When you break them apart wish-bone style, they can still function as standalone MP3 players, but the playlist in each will be identical to each other…forever. The creator, Liberty Fearns, explains: “The unit must first be snapped in half in order to become functional, creating a formal ritual shared between two people. Music is uploaded to a shared online play list, which will only download new music when both MP3 players are in their docks, so that audio content always remains the same. Users build a soundtrack to their relationship, like a growing mixtape.”

So, is there a future in co-dependent MP3 players for couples like Muffy and Buffy with the matching sweaters tied around their waist? Who knows. Might be good for love-struck teens. I find the whole thing creepy and really don’t want to speak of it again.