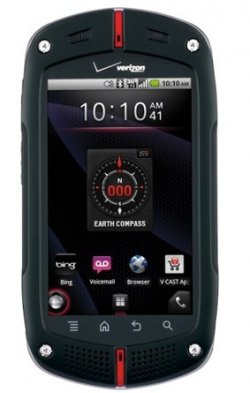 Casio’s rugged G’zOne Commando is now official. It is coming to Verizon on April 28th for $200 on-contract. The Commando is the first rugged Android handset on Verizon’s network. The device meets 810G military specifications for water, dust, shock, vibration, salt fog, solar radiation, and temperature extremes and runs Android 2.2 (Froyo). Sounds like it has you covered no matter what the situation is.

It also sports a 5 megapixel autofocus camera, WiFi, stereo Bluetooth, and a hotspot feature to share the 3G connection with up to five devices. It also comes with some apps like a compass, pedometer, star gazer, and thermometer.