Posted in Watches by Conner Flynn on April 6th, 2008 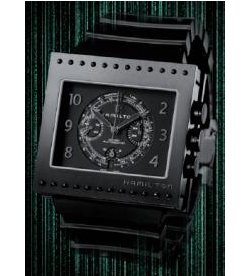 Hamilton introduced an awesome luxury watch for sci-fi fans at the BaselWorld 2008. The Hamilton Code Breaker is a watch with some amazing design and great level of detail. Just look at that square case and the dials within. Hamilton is not new to watches with a Sci-Fi flare.

They have enjoyed a long relationship with the science fiction movie genre, going back to 1968 when a desk clock was features in Stanley Kubrick’s 2001: A Space Odyssey. They also made the alien-shaped watches from Men in Black. Their watches aren’t for those on a Timex budget though, the Hamilton Code Breaker will set you back $1,995. And any geek knows that will buy you a lot of Star Trek or Star Wars toys.