Posted in Accessories by Shane McGlaun on July 11th, 2008 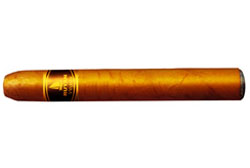 Anyone who doesn’t smoke can tell you that if you hang out with those who do smoke, at one point or another they try and get you to smoke too. If you like the idea of a cigar, but don’t actually want real smoke, nicotine and the risk of cancer that real smoking brings you might try the E-cigar.

Ruyan’s Freestyle E-cigar is a fake cigar that uses a microchip, airflow sensor, atomizer, and liquid cartridge to produce a dense vapor that looks like smoke from a real cigar. The upside is that it’s not real smoke and has none of the problem associated with real smoke.