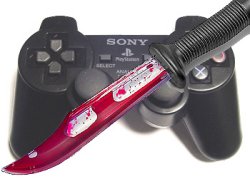 Two brothers living in Waukesha reportedly choked, cut and stabbed each other when they fought over a Playstation 2 video game controller. Waukesha Police are recommending that charges be brought against both brothers who acted out of violent anger. When family members are freakin’ stabbed by other family members over video games, it reminds us all that despite our various awesome human achievements, there are still some turds floating around in the human gene pool just waiting to be flushed. This is exactly the kind of thing that gets government all up in our gaming bidness, when parenting could have avoided it all, by raising level-headed humans instead of ignorant savages who choke and stab, because they couldn’t get back into their fantasy world fast enough.

The incident took place on Sunday at a home on Whiterock Avenue where the two brothers got into an argument over whose turn it was to play the video game. The fighting went from yelling to one of the brothers choking the other. Apparently, the brother who was being choked pulled out a knife and cut the hands of the choker, after which the kid doing the choking took the knife and stabbed his brother and then fled the scene. The brother who ran then walked to the hospital and suffered from severely frostbitten fingers.