Posted in Concepts by Conner Flynn on September 3rd, 2008

We’ve all been there. You need to pet your chicken even though your chicken is miles away. How do you do it? Maybe it’s sick of being fondled and that’s probably why the chicken crossed the road in the first place. It got sick of your harassment. Thankfully a group from the National University of Singapore’s Mixed Reality Lab have developed a way to pet your chicken through the internet. No chicken will be safe!

The idea was inspired by acts of pets and animal abuse through lack of welfare. This system enables humans to provide care for pets even though they are physically not together. The system enables a human to remotely touch her pet which is kept at home while she is away (in her office), and at the same time monitor the movement of the pet. This is realized by using a doll, which resembles the real pet located remotely, sitting on a mechanical positioning table. The pet owner interacts with the real pet by touching the doll. 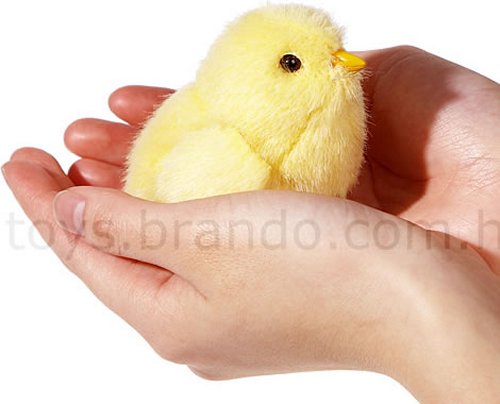 By now, you’ve probably seen the robot chicken from Sega Toys. The fuzzy chick has been hard to actually find and order. But now you can get the Robotic Chicken from Brando for $26.90 and thus all your chicken dreams will come true. It’s a lifelike baby chicken that cries and flaps its little wings like the real deal. When held, it will flap its wings, pet it on the head and the chick will chirp.

Each Chick is packaged in a transparent egg where it sits on a little nest. You get the idea. It’s all about you and a (fake) baby chick connecting and sharing a bond that’s probably really unhealthy, but hey you got nothing better to do, so why not.