Posted in Concepts by Conner Flynn on March 15th, 2009 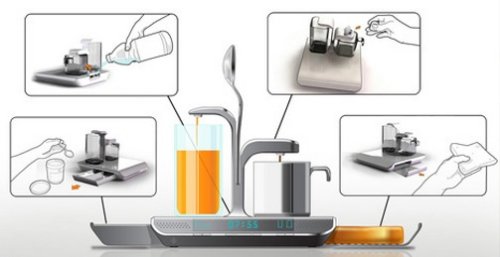 Alarm clocks are noisy because noise is the one thing you can’t stand in the morning. It works so good that the alarm has remained basically the same for years. What else could possibly entice you to get up and face your day? Maybe you’d be more apt to wake up for a well rounded breakfast.

That’s the thinking behind this French designed alarm clock. Instead of waking aggravated and hitting the snooze button, you’ll wake up to a glass of OJ. Just set the alarm, choose your breakfast and go to sleep. When you wake up, you’ll have a breakfast all ready for you. 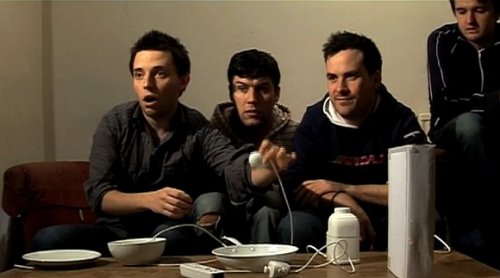 We love the Wii. Especially when it uses the Wiimote and other attachments properly, so it’s not all gimmicky. But Wii Breakfast may be taking it to extremes.

See for yourself in the Idiots Of Ants’ leaked gameplay footage below. The developer really went to town on the peripherals, which help you make toast, pour milk and read a newspaper. Oh yeah. Also Wii Sausages. 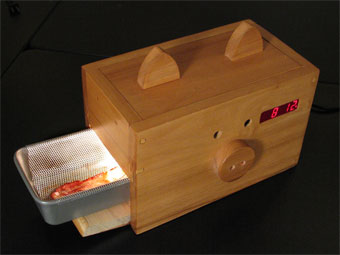 We all hate alarm clocks, but without them we would all just show up at work whenever we managed to rouse ourselves out of our slumber. Probably around 1 or 2 PM. The makers of the Wake n’ Bacon alarm clock want you to feel good about waking up.

And what could be better then waking up to the smell of sizzling bacon. It works like this: At bedtime you insert a slice of uncooked bacon. It will begin cooking ten minutes before the alarm goes off, so you can wake up to some artery clogging pig meat. It’s kind of disgusting and yet a monument to awesomeness at the same time. 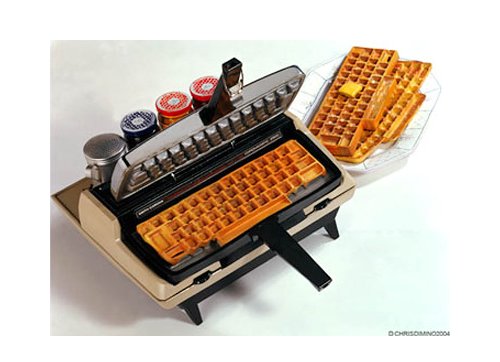 We’ve all seen the many geek toasters that do things like write text and such, but a geek can not live on toast and blogging alone. No more waffling, I present to you the Corona-Matic Waffle Keyboard Maker. This keyboard will give you sticky fingers. I know you’re excited, after all it even has a place for your various jams and syrups and what not. But there’s one problem my waffle loving Belgium friends. You can’t buy it. The hell you say? No, you can’t buy it. I just like to taunt you with breakfast foods.

It’s the brainchild of Chris Dimino and it was created as part of a project that involved giving useless old products a new lease on life. The useless product here was a Corona typewriter. It’s much better now that it makes keyboard shaped waffles. And you can’t get one…Neither can I. Anyone else need to head out to to an all day breakfast place? I’ll be back in a bit. 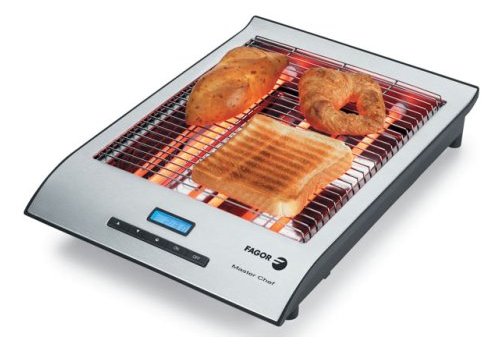 This toaster tosses convention completely out the window. The Fagor TP-2006 X is a flat toaster and it looks way cooler than traditional ones. It also makes for a dangerous breakfast time. It’s probably not good for those with a house full of kids who like sticking their hands in objects.

Like other toasters, the Fagor TP-2006 X comes with a crumb tray that can be slid out. It’s clearly begging to have a burger on it’s grill as well, though I’m sure they do not recommend it. Looks like it can fit four slices of bread on it’s surface at once. It’s got me rethinking everything. If we can have a flat toaster, surely we can have a George Foreman grill that stands upright. 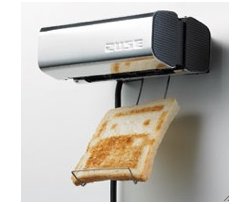 I’m not sure how fun toast is capable of being, but certainly it’s got to get better then pushing the lever and waiting for it to pop. The Zuse toaster works like a dot matrix printer for toast and will burn 12 x 12 pixel images onto your bread. It can be programmed for random patterns or you can use your own designs if you like.

It’s probably the first truly interactive toast and your mornings no longer have to be boring. Unfortunately, this is still in its concept stages. No doubt the designer is greedy and keeping all the fun for himself. But one day soon our toast will get an upgrade. Until then, toast will be as boring as it ever was. 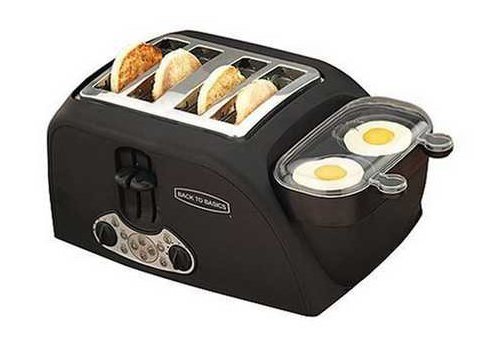 If you’re one of those people who absolutely have to make a trip to McDonalds every morning to get a Egg McMuffin, then this is for you. This gadget will toast your muffins and poach two eggs in just minutes, whipping up your favorite breakfast sandwich without requiring you to make the drive.

With four slots for muffins and two for eggs, you can make yourself two sandwiches at a time. You’ll pack on the pounds in no time. It only costs $60, so after roughly 60 sandwiches, it has paid for itself. Hell, put on a uniform and hit the sidewalk selling your own version. Just don’t come crying to me when a red haired and demented clown tries to put the screws to you for turning tricks in his territory. Cause he’ll cut ya! He’s as mean as they come.