Posted in Sci-Fi by Conner Flynn on September 2nd, 2008 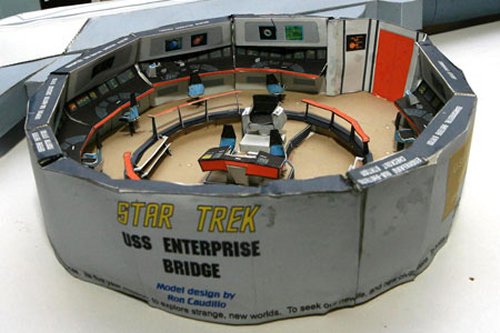 Now, I can understand wanting a Star Trek Enterprise cake or even building one of our favorite Star Trek items, the Final Frontier bike. But what kind of mind creates Star Trek replicas from Rice Krispies boxes?

Bob Prior, that’s who. He’s built sets and even characters from the show out of packages of Rice Krispies. Most Trekkies are just devoted to Trek, but Bob is also devoted to cereal. I think something inside of him went snap, crackle and pop and he’s never been the same since. The man just loves working with cardboard. Some other creations include a 15ft Titanic and 10ft Apollo 11 craft.