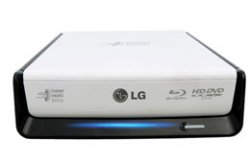 LG Electronics in the Middle East has released the Super Multi Blue Blu-ray Disc Rewriter, the BE06. The fastest rewriter that reads and writes Blu-ray at 6x. It’s aimed at laptop users or those with multiple PCs connecting USB 2.0 and a DC power connector.

It also has Optical Pickup Technology supporting Blu-ray disc write/playback, HD-DVD playback, and DVD/CD write playback. You can get one for $549, but as far as availability in the U.S., there’s no word just yet.