Posted in Batteries by Shane McGlaun on May 21st, 2008 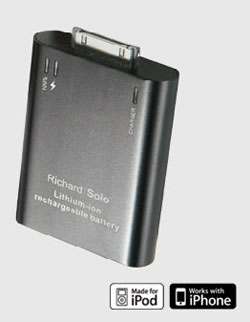 I find that I surf the Internet and watch YouTube videos on my iPhone much more than I ever thought I would. The bad part is that it seems like if I watch a few videos the phone is dead before I know it. Since the iPhone has no user replaceable battery you are out of luck when it goes dead and a charger isn’t handy.

Richard Thalheimer of The Sharper Image fame (or is it infamy?) has a new website where he sells gadgets called Richard Solo. While the site is apparently named after Han’s little brother, one of the first products is interesting. The Battery Backup for iPhone/iPod retails for $49.95 and is a 1200mAH lithium-ion that charges 100% in 3.5 hours via USB. The battery weight is 2.76 ounces and it measures 1.77” x 2.83” x 0.49”.