Posted in Weapons by Conner Flynn on November 23rd, 2008 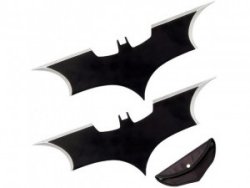 You’ll notice, I didn’t say stuffers. You won’t want to stuff a stocking with these, but rather chuck them until you stab the stocking, so that everyone knows that the Batman was there, making for a chilling and very creepy Christmas morning.

The Twin Bat Throwing Knife Set is made of solid 440 stainless steel that can probably slice and dice the flesh of anyone you gift them too. Two authentic bat shaped throwers are included as well a nylon case with belt loop. They’re cheap at only $9.99. “The stockings were hung by Batman with glee, when he threw some Bat knives that nearly hit me….”