Posted in Personal Transport by Conner Flynn on June 30th, 2008 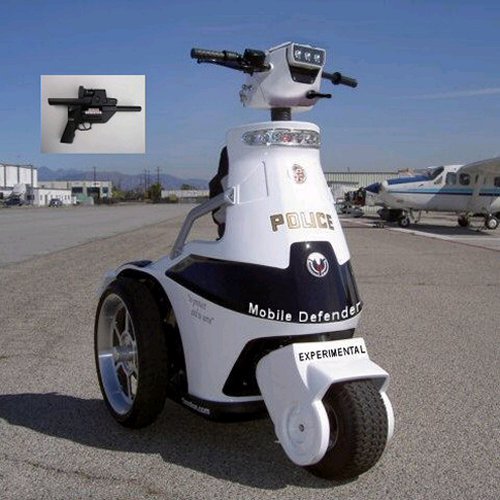 Sure, this scooter looks silly. And the idea that it could frighten you with a helmet wearing officer riding it seems silly as well. You would be wrong. The T3 Mobile Defender is something that should worry you. It comes equipped with a powerful non-lethal air gun that could kill you dead if it hit you in the head. So, in order to avoid such a scene, the gun is equipped with a holographic sight system that makes it super accurate.

An eyepiece shows a red target dot, which is transmitted to a monitor, then to the gun. Barry Lamperd, the creator, says that as long as the holographic sight is on target, you can’t miss. That’s easy to say from his perspective. I hope he’s right, because they plan to sell the scooter to the US Army for crowd control situations. (In Iraq? Or are they expecting us to get uppity?) Expect to see it cruising your neighborhood before too long as well.