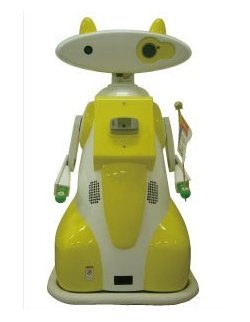 Japanese retailer Aeon Co. said on Tuesday that it has introduced a four-foot-seven tall, yellow-and-white robot at a store in the southern city of Fukuoka. The robot will be in charge of entertaining the children. Parents are encouraged to leave their children with the kid-sized machine, and the kids wear special badges that bear codes which the robot can read. (In other words, our young have now been tagged. They can now be tracked by our shiny metal overlords. Oh joy!)

The robot can identify the children’s names and ages and chat with them.(The indoctrination begins. CONFORM, tiny larvae human.) The robot also has a projector in one of its eyes to beam advertising messages(directly into child retinas) — or to show pictures that it has captured with a camera installed in the other eye.(Pictures of dead humans and the carnage to come. It encourages the whole CONFORM thing.)