Posted in Star Wars by Conner Flynn on March 7th, 2010 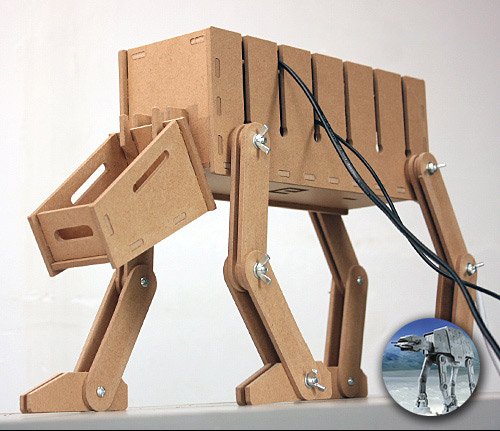 AT-ATs can do more than just crush rebellions on Snow planets. They can also help you tidy up untidy cables on your desk. This DIY kit includes space for a surge protector and a detachable remote caddy.

Pretty awesome. But just like the real thing, it can easily be taken down and brought to it’s knees should tiny snowspeeders use those cables to fight back. Let’s hope that doesn’t happen and make a mess of your desk.

END_OF_DOCUMENT_TOKEN_TO_BE_REPLACED
Permalink | Comments |
Posted in Star Wars by Conner Flynn on May 14th, 2009 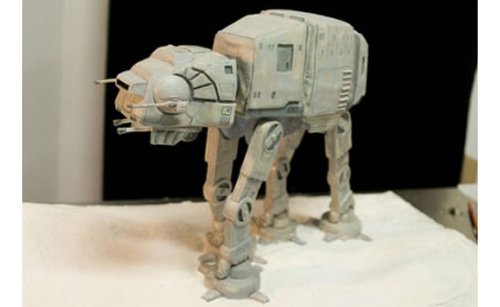 It shouldn’t come as a big surprise to our readers that we love cake. After all, we brought you 20 awesome robot cakes, 25 awesome geek cakes and 25 more awesome geek cakes. This one…wait for it…really takes the cake.

Jennifer Luxmore of Sin Desserts in Providence, RI made this amazing AT-AT cake. Awesomely detailed and obviously delicious. It’s what the rebels on Hoth ate in celebration after fleeing the ice planet. I would tie string to my fork and fly my utensil around it’s legs like a snowspeeder, bringing it to it’s knees so that I may devour it. 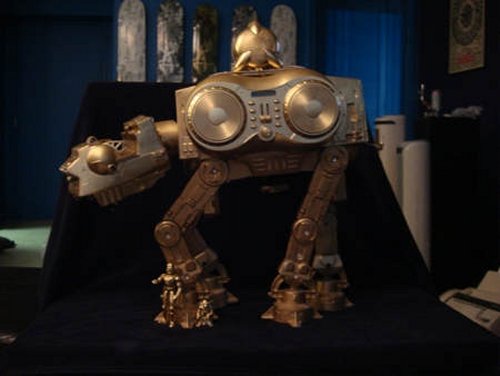 Sure, that AT-AT walker from the other day was awesome and all, but what if you like your AT-AT audio to be a bit more modern? And gilded? Then this one is likely to be more up your alley.

It’s basically an AT-AT toy with an electronic turntable glued to the side and spray painted gold. For some reason a golden Darth Vader and Yoda are riding up front, while the iPod sits in the butt area. Surely this is what happens when the Empire goes all gangsta on your ass. You get a slow drive-by walk-by with this beast poppin a cap in you. 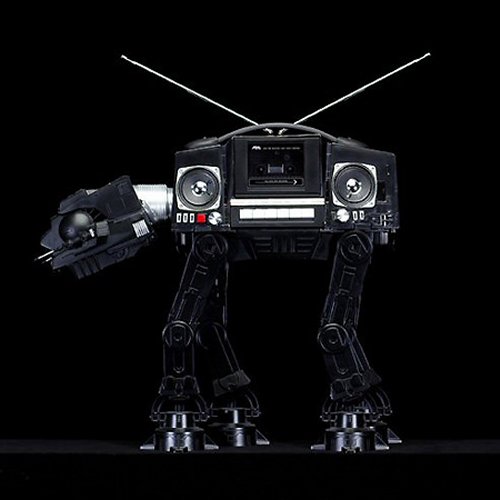 While the AT-AT boombox is easily stopped by a headphones cord wrapped around the legs, it will destroy the morale of any rebels within earshot. Hoth bases easily fall to this beast when it’s cranking some Barry Manillow or Yanni.

This thing not only looks like an AT-AT Walker from the Star Wars movies, it actually functions as a boombox, complete with tape deck, speakers, and antennas. 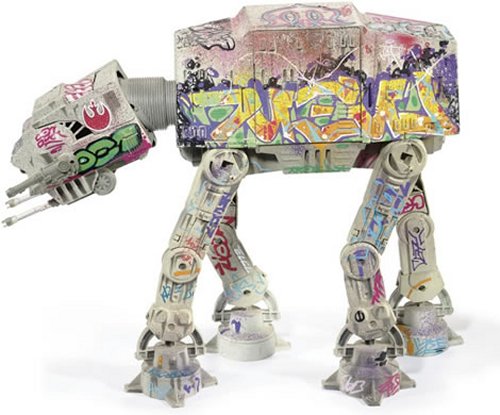 When you’re part of the evil Empire, you have to conquer worlds. Street by street if you have to. There’s at least one street somewhere, where they made a mockery of the Empire almost as badly as the Ewoks did. Maybe even worse. That AT-AT must have had a long shameful walk home.

This Hasbro Star Wars vehicle was customized by Graffiti artists EASE and JK5 under the direction of SUCKADELIC. It’s done in the Aurebesh language, a fictional letter system created for the 6 Star Wars films. It’s being auctioned off at Christies, so you probably can’t afford it.