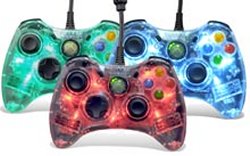 These X-Box 360 controllers will impress your friends when you turn the lights out and embark on some night-time gaming. They’re called Afterglow controllers, presumably because several of them mashed their buttons together until climax and now they are just basking in it. No, that would be silly. It’s because they glow.

They’ll add some excitement to your otherwise dark abode. These are available in 3 glowing colors and you can pre-order from EBGames now for $29.95. They should ship later this week.