Posted in Cameras by Conner Flynn on May 7th, 2009 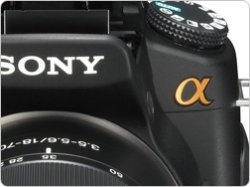 Sony is preparing not one, not two, but three entry-level Alpha digital SLRs for a launch in the near future. A drop-down menu on the company’s UK support page gives it away, revealing the A330 and two lenses (50mm and 18-55mm) when choosing from cameras, plus an analyst’s Twitter update has also revealed the existence of the A230 and the A380. No details about either of these cameras.