Posted in Vodafone by Conner Flynn on March 10th, 2010 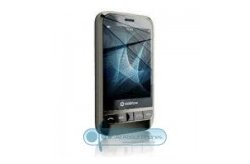 Vodafone’s 845 Android phone has just leaked online. We know that it will be affordable and it might ship with Vodafone 360 social networking support. The budget Android-powered smartphone is scheduled to hit the market in May sometime.

Some features include a 2.8″ QVGA display, 3G and Wi-Fi, GPS navigation support, a 3.2-megapixel camera and Bluetooth. It’s looking like the Vodafone 845 will be €150 on pay as you go at launch.