Posted in Robots by Conner Flynn on September 21st, 2009 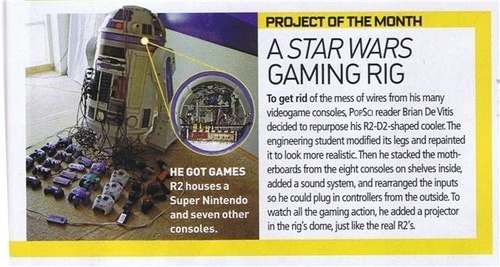 This R2-D2 may be the best mod ever. It was created by Popular Science reader Brian De Vitis and holds not one, not two, but eight consoles, a sound system, and a projector. You had me at eight consoles R2. This all started with an R2-D2 shaped cooler that he modified.

Then the consoles were gutted to rearrange the controllers inside so all the ports could face in the proper direction. He still had enough space inside for a projector and a sound system. This man is my new hero.