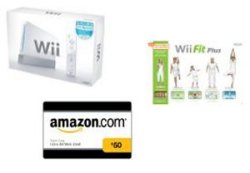 The Wii has had it’s time in the sun, but lately it seems to have lost some traction and given way to it’s higher resolution competitors. Lately I’ve been seeing all kinds of Wii deals. Even businesses giving them away as promotions.

Well, Amazon has a great deal if you haven’t bought a Wii yet. When you buy the Nintendo Wii console along with a Wii Fit Plus with Balance Board you get a free $50 Gift Card. Normally the Wii sells for $199.99 and the Wii Fit Plus with Balance board sells for only $89.99. The overall cost is $289.98. But subtract the $50 gift card value and you get this Wii bundle for $239.98 on Amazon.