Posted in treasure by Shane McGlaun on July 12th, 2010 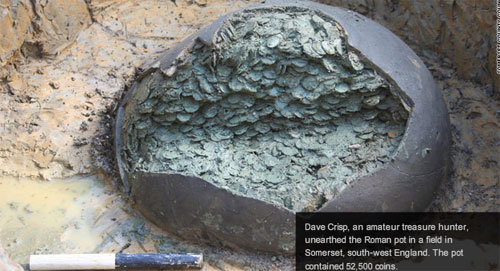 One summer my cousin had a metal detector and we went all around the beach on vacaiton lookgin for buried treasure. The closest we can to treasure was a bunch of those old-fashioned pull tops from cans and someone’s lost glasses.

A guy in the UK has had much better luck than I ever did with a metal detector. The person was working in a field in south-west England and discovered a pot filled with Roman coins. The pot held 52,500 coins and the estimated worth of the coins today is about $1 million.