Posted in Digital Video,SanDisk,Sansa,TakeTV by Darrin Olson on October 22nd, 2007 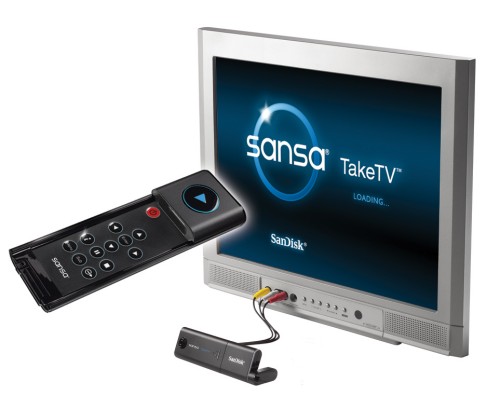 Today SanDisk has launched the Sansa TakeTV video player, a bridge solution designed to easily bring your downloaded video content from your computer to your television. The product was formerly announced as USBTV back in January but today went on sale through the Sansa website as TakeTV. The product launch is also coinciding with the launch of a beta service called Fanfare which is an online distribution platform where SanDisk will provide video content that can be downloaded to your PC.

The TakeTV device is actually quite simple. It sticks with the technology that SanDisk knows well – flash memory. According to the company, using the TakeTV device is as easy as using a USB flash drive. Users can simply plug the USB port into their computer and download video content to it. Once downloaded the device can be placed in a cradle which is connected through standard A/V connections to a television and by pressing play on the integrated remote control owners can watch the stored video on their TV.