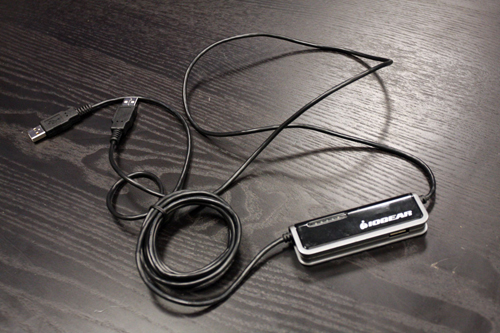 IOGEAR is introducing a KVM switch which is reportedly the first that enables a laptop to replace the traditional keyboard, mouse and monitor on a second computer. It is called the USB Laptop KVM Switch and it prices around $130.

The IOGEAR USB Laptop KVM Switch connects two computers via USB 2.0 ports, letting individuals manage both computers with the laptop. It comes with built-in file transfer utility software that lets consumers drag and drop files or create backup copies between machines. Also built-in is an integrated USB 2.0 port to access a compatible device from the laptop and also “desktop scaling that modifies the desktop computer’s resolution to be compatible with a laptop screen.”

Avocent, a developer of IT solutions, has announced a new series of KVM switches which support multimedia applications. The Avocent SwitchView 100 series is set to price between around $45 to $100.

The Avocent SwtichView 100 KVM switches come in two and four port configurations, supporting PS/2 or USB connections for a total of four models. Like other KVM switches they let you consolidate interaction with multiple PCs to one keyboard, mouse and monitor. Also included for switching with these units is audio and microphones.

You know how frustrating it can be trying to run your illegal movie copying operation out of your basement with multiple computers and only one monitor to plug and unplug from one machine to another. Network Technologies is your new best friend in this regard, announcing a new eight port USB DVI KVM switch priced at around $980.

The NTI UNIMUX USB DVI KVM Switch allows you to connect and control up to eight single-link DVI enabled computers with one DVI monitor, USB keyboard and USB mouse (it’s also available in a four port model). The switch supports 1900 x 1200 resolution and features single-link HDMI connectors to save space. NTI has also enabled this device with autoboot USB switching which boots attached computers at the same time.