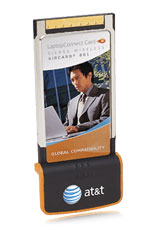 AT&T is looking to give a speed boost to users of its 3G wireless network via a new wireless laptop card. The Sierra Wireless AirCard 881 will be free, subject of course to your standard rebates and two-year contract.

The Sierra Wireless AirCard 881 is compatible with new High Speed Uplink Packet Access (HSUPA) technology being pushed by AT&T onto its existing wireless network. This card will allow average upload speeds between 500 Kbps and 800 Kbps and also support enhanced HSDPA download speeds ranging between 600 to 1,400 Kbps.