Relatively unknown consumer electronics company Venturer has figured out a way to quickly get on the radar of a lot of people by introducing to market one of the cheapest HD DVD players to date. The new Venturer SHD7000 is priced at in the low $200 dollar range.

The Venturer SHD7000 is typical of HD DVD players, offering compatibility with a number of other disc formats including DVD, DVD-R/-RW, CD and CD-R/-RW. You get typical advanced multi-channel audio support for a variety of audio codecs like Dolby TrueHD and DTS-HD. There’s also HDMI output and Ethernet connectivity.

If you’ve considered getting your hands on an HD DVD player before the holidays you may want to consider hanging out at your local Wal-Mart tomorrow morning. According to their totally legit Secret In-Store Specials page, many stores will be offering the Toshiba HD-A2 HD DVD player starting Friday at 8am through the weekend for a mere $98.87. The player was previously priced at just under $200 and is still listed at around $200 at Amazon and almost $300 at most other places.

The Toshiba HD-A2 is a 2nd generation player that supports the HD DVD disc format, rivaled by none other than the high-definition Blu-ray disc format in an ongoing high-def war, which currently seem like it will have no end. The player outputs in 720p/1080i formats and has SD up-conversion to 480p/720p/1080i. And as you might expect, as soon as you buy this one its expected to be followed up soon by its upgrade, the Toshiba HD-A3, which Sears is planning on selling for $169 with two HD DVD movies bundled with it. 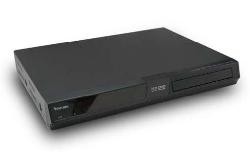 Venturer Electronics has announced a simple, entry-level HD DVD player expected to ship in the coming months to consumers in North America. The Venturer SHD7000 features 1080i video output through and HDMI connection along with Dolby TrueHD sound to round out the home theater experience.

Also included in this player is a built-in Ethernet connectionwhich allows access to the internet to download bonus features from the studios and can sometimes unlock pre-recorded content available on the discs. The player will also upconvert regular DVD’s through the HDMI connection.