Posted in Chargers,Gomadic by Nino Marchetti on September 28th, 2007 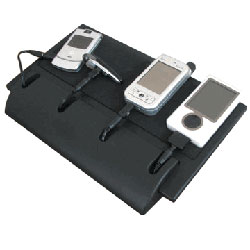 Gomadic Corporation released this week a device which lets you cleanly charge up to four portable devices at the same time. The Gomadic QuadCharge Universal Charging Station is priced at around $70.

The Gomadic QuadCharge Universal Charging Station lets one charge PDAs, cell phones, smart phones, Mp3 players, video/media players, portable video games and GPS receivers through the use of interchangeable adapter tips which lock into cables in the station. It uses one wall outlet connection to charge all of your devices.